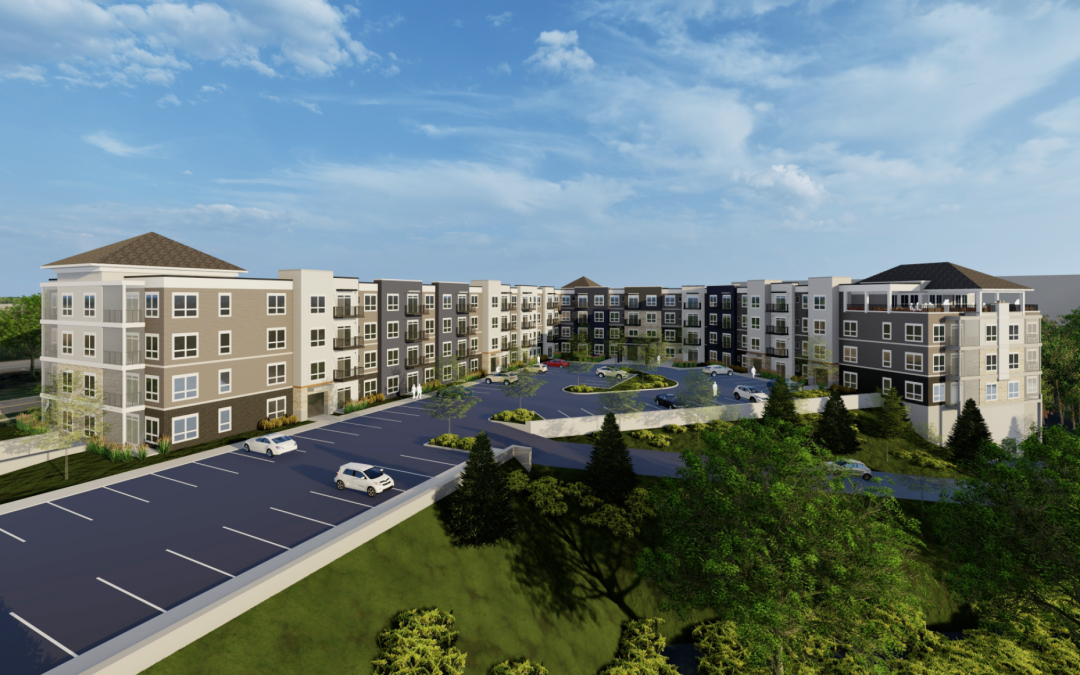 Vincent Companies plans to expand into Burnsville with a 128-unit, age-restricted apartment building off Grand Avenue South. We look forward to joining this growing community! Special thanks to our project partner, Rachel Development.
We look forward to another successful project with the help of Lyon Contracting, HMA Architects, Samabtec, and our property management team over at Granite City.
Article from Finance & Commerce: https://finance-commerce.com/2022/04/age-restricted-homes-coming-to-burnsville/

Eden Prairie-based Vincent Development is nearing construction of its proposed 128-unit age-restricted apartment building in Burnsville, a project that represents the third and final phase of a 455-unit community in the city’s TwinLakes area.

The market-rate project garnered positive reviews Monday night from the city’s Planning Commission, which recommended approval of a handful of variances related to the four-story building.

Though the requested variances still have to go before the City Council, the project appears to be headed toward swift approval. Planning Commission Chair Chris John said the project will be on the consent agenda of the April 19th City Council meeting.

Aaron Maciej, managing partner of Vincent Development, said Monday that he hopes to start moving dirt in August. The 14.5-acre project site is at 14545 Grand Ave. S., which is just southwest of the 275-unit Rize on Grand apartment building.

Rize on Grand was the first phase of Vincent’s Twin Lakes residential development. Phase two created a 52-unit “townhome neighborhood,” according to city documents. The City Council signed off on a concept plan for the overall development in 2019.

The new building is an “active adult” product targeted to people 55 and older, though the typical resident will be in their late 60s or early 70s, Maciej said. The building won’t offer care services associated with independent living or assisted living facilities.

“It’s catered to, I would say, older adults that are looking for a different kind of lifestyle,” Maciej said at the commission meeting. “Maybe they’re wintering and they want to have maintenance-free living or things like that. We see that more often now, especially in Minnesota, where people are getting away from the cold weather, which never seems to end.”

Asked at the meeting if the building will remain age-restricted over the long haul, Maciej said it’s designed with older residents in mind. For example, he said, it won’t have studio apartments and will include bigger units than a typical market-rate building would offer.

“It wouldn’t really lend itself to not have it be age-restricted,” Maciej said. “People that are looking to move into this product are moving from their homes, and so they’re trying to replace that, which is why we have a really nice amenity package.”

At Monday’s meeting, the Planning Commission unanimously recommended approval of variances related to the building’s height, impervious surface, grading and retaining walls. The meeting also included a public comment period. No residents spoke for or against the project.

“The builders that you’ve been using, obviously, are efficient,” Timmerman said. “They’re getting the products put up on a timely fashion. It’s nice to see some of the homes being marketed and filled now. It’s nice to just see progress and more movement toward completion.”

Vincent Development, part of Vincent Companies, is a real estate development company that specializes in senior and assisted living communities, apartment buildings and lifestyle centers, according to the company’s website.