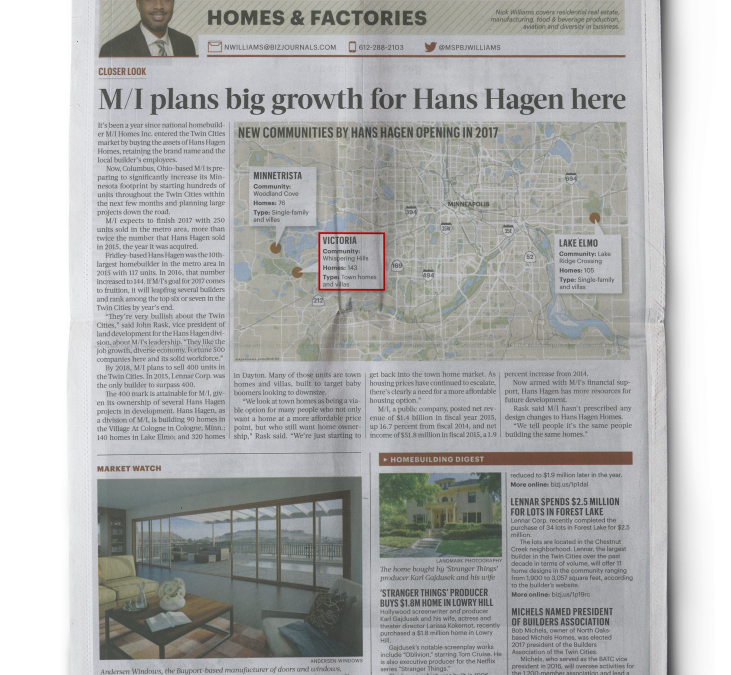 It’s been a year since national homebuilder M/I Homes Inc. entered the Twin Cities market by buying the assets of Hans Hagen Homes, retaining the brand name and the local builder’s employees.

Now, Columbus, Ohio-based M/I is preparing to significantly increase its Minnesota footprint by starting hundreds of units throughout the Twin Cities within the next few months and planning large projects down the road.

M/I expects to finish 2017 with 250 units sold in the metro area, more than twice the number that Hans Hagen sold in 2015, the year it was acquired.

Fridley-based Hans Hagen was the 10th-largest homebuilder in the metro area in 2015 with 117 units. In 2016, that number increased to 144. If M/I’s goal for 2017 comes to fruition, it will leapfrog several builders and rank among the top six or seven in the Twin Cities by year’s end.

The 400 mark is attainable for M/I, given its ownership of several Hans Hagen projects in development. Hans Hagen, as a division of M/I, is building 90 homes in the Village At Cologne in Cologne, Minn.; 140 homes in Lake Elmo; and 320 homes in Dayton. Many of those units are town homes and villas, built to target baby boomers looking to downsize.

“We look at town homes as being a viable option for many people who not only want a home at a more affordable price point, but who still want home ownership,” Rask said. “We’re just starting to get back into the town home market. As housing prices have continued to escalate, there’s clearly a need for a more affordable housing option.”